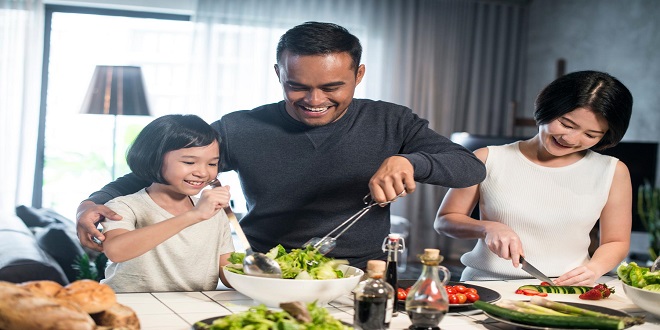 Food frequencies before and after the life event were compared for all participants who indicated that they moved in with a partner. Although the literature suggests that married men eat healthier diets due to their partners’ influences, we found no indication of healthier food choices in men within one year of starting cohabitation.

Even though the comparison between different household types revealed higher vegetable consumption in men living with a partner compared to men living alone, the long-term results showed no improvements in salad, vegetable or fruit consumption with the beginning of cohabitation. In contrast, men’s dietary behaviours shifted to a more undesirable diet, with a higher consumption frequency of red meat, processed meats and savouries. However, it cannot be ruled out that the positive influences of a female partner, due to their more health-conscious food decisions and their role as nutritional gatekeeper, will affect men’s diet positively over the long term.

Women´s food choices, on the other hand, changed significantly only with regard to a higher consumption frequency of processed meat after moving in together. One might speculate that women are more prone to adopt their eating styles towards men’s eating styles and food preferences. Additionally, some foods are less likely to be a part of dietary convergence, because they are mostly consumed alone; independent of the partner’s preferences (e.g. yoghurt).

This might be the reason why fruit consumption did not change between household types or after moving in with a partner. Fruit is often consumed as snack, and therefore, an individual’s snacking behaviour is likely to be more influential than a family’s meal behaviour in its consumption.

Another important event in a person’s life is the birth of the first child. Such a life event can encourage parents, especially mothers, to change their health attitudes and to start paying more attention to their diet than they did prior to the event. In fact, vegetable consumption was much higher in women after pregnancy. They reported an average consumption of six portions per week prior to the life event, and ten portions per week after the life event (Figure 3).

In contrast, men’s food frequency patterns did not change after the transition to parenthood, and they only slightly decreased their beer consumption.

The evidence from this study implies that in the transition to cohabitation, people are more likely to change their dietary behaviour, although both men’s and women’s food choices shifted in an unfavourable direction. This may have far-reaching consequences, because the early cohabitation period seems to be a crucial time period in which people begin creating their future family’s eating habits. The transition to parenthood seems to be an additional period in which people are more likely to implement dietary changes.

Previous articleTime for Change? – Food Choices in the Transition to Cohabitation and Parenthood
Next articleBest Ways to Lose Weight While Eating Healthy Diet Foods to Maintain Weight Loss