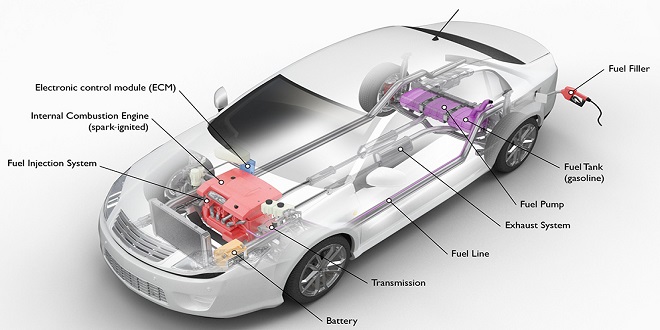 Los Angeles, in 1947, was the first place to call attention to atmospheric pollution problems, in 1952, Dr. Arie J. Haagen-Smit blamed the rise on the automobile, which was backed by his research. [2] In a complete combustion process, for every kg of hydrocarbon fuel burnt, 1.3 kg of H2O and 3.1 kg of CO2 is produced.

The undesirable exhaust emissions, NOx, HC, CO, CO2, polyaromatics, soot, lead salts, nitro-olefines, and aldehydes ketones, are produced in very small quantities. And of these toxins, only NOx, HC, and CO are produced in large enough quantities to cause environmental problems.

CO2 caused concerns because it was suspected of allowing ultra-violet rays to penetrate the atmosphere. CO causes problems by being absorbed into red corpuscles of the blood, preventing the absorption of oxygen. Lastly, Nitric acids and nitrogen dioxide along with HC caused smog.

The first method used for controlling emissions produced by the automobile was to have precise control over the carburetor or fuel injection system, which provided accurate mixtures of fuel and air for complete combustion. During idling, the fuel mixture was either made to be completely combustible or cut off.

Devices that were sensitive to manifold pressure, and tapped immediately downstream of the throttle, were employed to retard the ignition during slow engine speeds. Gulp valves were produced to compensate for the lack of air when the throttle is suddenly closed, allowing for the fuel to be completely combusted. High-temperature thermostats were employed to improve cold weather combustion.

PCV, positive crankcase ventilation, was employed to eliminate the crankcase fumes. To combat the problems with NOx, ERG, exhaust gas recirculation, was used to lower the temperature of combustion. This was needed because to the production of NOx took place generally above 1350 degrees Celsius.

General Motors was the first automotive company to employ the catalytic converter as a standard feature on their automobiles to meet the rising emissions regulations during the early 70s. They chose this approach to comply with regulations while keeping the durability of their engines.

In addition to this change, they also argued the benefits of unleaded gasoline, which would eliminate lead oxyhalide salts, reduce the combustion chamber deposits, and further reduce HC due to additional oxidation with the lack of leadership.

Basic maintenance on vehicle 112 was reduced, and it assisted in the use of the catalytic converter and overlooked the alleged toxic effects of leaded salts in the environment from leaded gas going through the converter.

The two-way catalytic converter is made up of a container, constructed of stainless steel, and the catalysts and supporting features inside the container.

Around the converter, an aluminum heat shield protects nearby parts of the automobile from potentially damaging heat. The two catalysts usually used are platinum and palladium, or in some cases, just platinum. In the two-way converter, HC and H2O are oxidated and converted to form H2O and CO2.

The support piece for the catalysts was developed into a one-piece honeycomb structure, which had large surface areas on which the catalysts were deposited.

They operated at 550 degrees Celsius under normal working conditions. This type has the advantage over pellet-type converters because of their being more compact.

Previous articleWhy online sports betting is So Popular Now – Learn the Why and How
Next articleThe Benefits, Dangers, and Truth About Testosterone Replacement Therapy