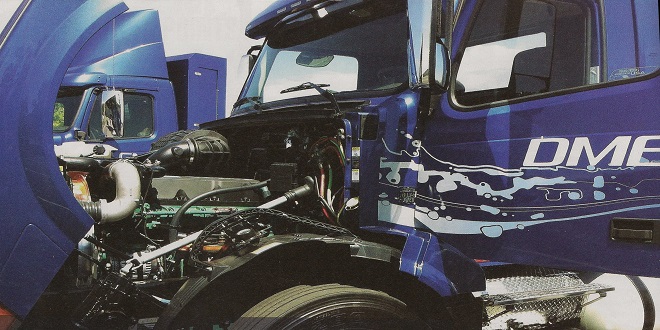 Dimethyl ether (DME) is an interesting alternative to diesel fuel. It is obtainable from coal and from natural gas, but also from wood trash. Using wood trash, the procedure is similar to the production of methanol (i.e., gasification and synthesis). The availability of this resource and the resulting CO2 recycling, as in the case of alcohol, are accompanied by additional benefits.

The high oxygen content of 35 % mass allows, as for oil esters, efficient combustion and, therefore, low emission of soot and particulates. The low inflammation temperature of 235 C favors the combustion process, allowing an improvement in thermal efficiency.

DME in the liquid phase has a density that is only 15 % less than the density of diesel fuel. The viscosity is much lower than that of diesel fuel, creating problems within the injection system. However, in comparison with oils, lubrication of moving parts within the injection system is not possible with such fuel. Because of the similar percentages of C, H, and O to those in a molecule of methanol, the heating value, stoichiometric air requirement, and mixture heat value are almost identical for both DME and ethanol. Thus, the mixture heat value is slightly lower than that of the diesel fuel-air mixture. Nevertheless, the better vaporization and combustion of RME compensate for this disadvantage.

Liquid DME is storable at 20 C and 0.5 MPa. Liquid gases are characterized by relatively high compressibility. Under the damp pressure limit, the formation of vapor bubbles is very probable, indicating a disturbance of function within the injection system. Therefore, such a system comprises a supplementary pump for maintaining the RME pressure over the damp limit. On the other hand, leakages in the modules of the injector system have a similar effect. In this case, the gaseous RME phase from such places is conducted to a separate purge tank and pumped at higher pressure, becoming liquid, before returning to the main tank.

An injection system in which high-pressure generation occurs only during the injection event, like a pressure wave, is not applicable for DME because of its compressibility. The only solution, in this case, is the storage of DME at constant high pressure, in a common rail. An initial pressure pump included in the tank maintains the fuel at a pressure corresponding to its liquid phase, before entering the high-pressure pump, which ensures a strong flow recirculation because of the compressibility of DME. The fuel contains additives for pump lubrication.

Tests with DME in diesel engines with swept volumes of 1 dm3 and 2 dm3 per cylinder show excellent results. The ultra-low emission vehicle (ULEV) norm is achievable for larger engines without a catalyst, and for smaller engines with an oxidation catalyst.

Alcohols, hydrogen, oil esters, and DME are true alternatives as fuels for thermal engines, being renewable and environmentally compatible.

Synfuel or designer fuel with well-calculated and composed molecular structures is increasingly becoming the expression of a new trend in the research and development of new energy sources. The vast and long experience of refining, distillation, gas synthesis, transesterification, pyrolysis, electrolysis, and other thermal and chemical procedures has led to new and very effective combination possibilities that open the door to the controllable formation of molecular structure. The requirement for on-board fuel storage at a high energy density under conditions that are not far from the ambient pressure and temperature has forced the development of structures such as BtL and GtL as intermediate steps.

Mixtures of such solid powders, generally with aluminum content, are utilized in advanced rocket techniques because of their high energy density. Mixtures of metallic powders with defined percentages can be considered synthetic fuels; their composition is, however, easier to control than in the case of liquid fuels. From this point of view, alternative thermal engines with external combustion for an onboard current generation have a remarkable potential for future applications.

Previous articleAn Extensive Guide About KCS Tokens
Next articleWhat are the important things to look at in PG before finalizing it?